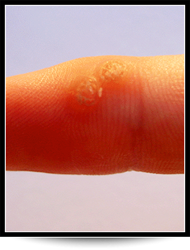 The hands and feet are the most common sites for warts to grow on, although they can occur anywhere you have skin, including your scalp, nose and tongue. Since warts are caused by a virus (not by touching nasty little toads, as most of us were taught), they can be spread to other parts of the skin and to other people. Shaving over warts can irritate the skin and also further spread the warts on the face or legs.

Since warts often start out as small as a pinhead and grow fairly slowly, you may not notice them at first. Then it may seem as though they sprouted overnight. Plantar warts, which infect the soles of the feet, may be easily mistaken for corns or calluses.

Even though they are harmless, warts can be a difficult treatment problem. The method your doctor chooses will take into account the type and location of the warts, their size and number, the degree of tenderness when pressed, and your age, sex and history of previous treatment. Sometimes several different treatments are necessary and sometimes the warts fool everybody and disappear all by themselves!

Some common types of warts

Certain types of warts tend to spread within scratch marks. Combing your hair can spread warts on your scalp, and shaving over warts can spread them, too.

Why is it that some people get warts and others don't?

Some people appear to lack immunity to the wart virus. When warts disappear without treatment, it may be because the body has strengthened its immune-responsiveness.

Will I have scars after my warts are removed?

Many treatments are available that leave little or no scarring. Ask your doctor about them.


If your wart was frozen with Liquid Nitrogen in the office, wait until the area is healed before starting the Duct Tape treatment.

Wart medications that contain salicylic acid can be used to treat common warts.