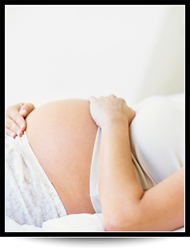 Most of the skin changes seen in pregnancy are due to the effects of hormones on various body structures. The effects on the skin may be considered normal and not disease-related. However, these same effects may be viewed as pathologic to the woman who has new skin changes. Some of these changes are permanent, but others are present only during or for a short time after pregnancy.

The most common pigmentation change in pregnancy is called hyperpigmentation, or darkening of the skin. It is believed that higher levels of estrogen, progesterone, and melanocyte-stimulating hormone cause this skin darkening. The latter is a hormone that causes the pigment producing cells, or melanocytes, to make more melanin. Areas that were darker prior to pregnancy such as the areolae, nipples, genital skin, armpits, and inner thighs tend to get even darker. Sometimes a dark line, called linea nigra, forms on the abdomen. Other women experience a darkening of facial skin called melasma.

Hair changes in pregnancy can vary from too much to too little. Many women notice more, darker hair on the face, arms, and legs. The same women may also notice a thinning of the hair on the scalp. This condition is known as telogen effluvium and is caused by a shift of these hairs to the telogen, or resting, phase. It is during the telogen phase that hairs are shed. This shedding may last from 1 to 5 months but may not stop until 15 months after delivery. Nail changes in pregnancy include brittleness, groove formation, or a separation of the nail from the end of the nail bed called onycholysis.

Melasma or chloasma is a brownish discoloration of the face that occurs most often in women. Men can also develop this problem. The brown color often fades in winter and gets worse in the summer.

Pregnancy (mask of pregnancy) is the most common cause of melasma. Women who are taking oral contraceptives are at risk of developing melasma. Sunlight is a major factor in the development of melasma.

How do I treat it?

A strong sunscreen such as Elta Block, Ombrelle, and Shade Lotion SPF 45, etc., should be applied to the face each morning. Hydroquinone 4% cream (available by prescription) applied to the face twice a day (in the morning before applying sun screen and later in the day) is the main treatment for melasma. Retin-A cream applied to the entire face each night before bed has been shown to be an effective treatment for melasma. Dr. Guccione and Anne Carlisle, FNP, can also prescribe a combination of prescription medications that may be effective in treating your melasma. Most importantly, however, avoid intense sunlight! This brings out more brown discoloration. It is your body's natural protection response from the sun.

Pemphigoid gestationis is also known as herpes gestationis, although the latter name is misleading since this condition is not associated with any virus. This is a rare, itchy, autoimmune disease that occurs during the second and third trimesters of pregnancy and around the time of delivery. Pemphigoid gestationis occurs in 1 per 7,000 to 50,000 pregnancies.

It begins with very itchy, red hives or small bumps around the belly button. Within days to weeks, the rash spreads, and the hives and bumps join to form bizarrely shaped circular patches that cover a wide area of skin. The rash can involve the trunk, back, buttocks, forearms, palms, and soles. It usually does not involve the face, scalp, or inside of the mouth. After 2 to 4 weeks of this rash, large, tense blisters form at the edges of the rash or in apparently normal skin.

This condition usually starts during the second or third trimester, although it has been reported in the first trimester and a short time after delivery. The average appearance is at 21 weeks gestation. Spontaneous clearing of the rash may occur later in the pregnancy, but uncomfortable flares occur immediately prior to delivery in 75% to 80% of women. The rash may also recur when menses resumes or with the use of oral contraceptives. With subsequent pregnancies, pemphigoid gestationis usually recurs earlier and may be more severe. Only 8% of women do not develop pemphigoid gestationis in subsequent pregnancies.

A few women with very mild cases of pemphigoid gestationis can be treated with steroid creams and antihistamines. However, the majority of women require oral steroids to control their symptoms. A high dose is usually used to get symptoms under control and then tapered as the rash improves.

Because antibodies cross the placenta, the antibodies that cause pemphigoid gestationis can affect the baby. A noticeable rash has been reported in 5% of newborns born to moms with this condition. This newborn rash is transient and resolves on its own without treatment. There is evidence that women with pemphigoid gestationis have an increased risk of premature delivery. Current studies indicate that there is not an increased risk of miscarriage or stillbirth.

This condition was first described in 1981. It is believed to be more common than previously thought. One study showed the incidence of this disease to be 1 per 3,000 pregnancies.

The rash consists of several small red bumps that may or may not be filled with pus. These bumps are usually on the shoulders, upper back, arms, chest, and abdomen. The condition looks like acne. However, culture of the bumps does not reveal any bacteria. The rash can be very itchy.

Pruritic folliculitis of pregnancy typically develops in the second half of pregnancy. It resolves spontaneously within 2 to 3 weeks after delivery.

The cause of pruritic folliculitis of pregnancy is unknown. Some investigators believe it is caused by hormonal changes.

Pruritic folliculitis of pregnancy is typically treated like mild acne. Benzoyl peroxide has been used with some success, but antibiotics are not needed. Oral antihistamines are useful to treat the itching.

There are differing reports about the affect of pruritic folliculitis of pregnancy on the baby. One study showed an increase in lower birth-weight babies. However, other studies did not confirm this. This condition does not increase the risk of prematurity or of stillbirth.